The early 944s have separate heating and A/C systems which provide air flow to a common mixing chamber. Each system has it's own housing and blower. Air flow through the system is contolled by flappers which are operated by cables. The heater control valve is also controlled by a cable. So, when there's a problem with the system where there's no heat or excessive heat, it's normally due to a broken or disconnected cable.

On late model 944s (1985.5 and newer), there are several problems that can cause the full heat condition. The first and most common problem is a damper linkage in the driver's side footwell (for left-hand drive cars). Stick your head in the footwell and look up and toward the center console. You should see a small diameter metal rod which rests in a white plastic support and is held in place by a metal retaining clip. On later model 944s, there are two damper linkages instead of one and they are located behind a plastic cover. One of the plastic clips on the linkage may be broken preventing the linkage from operating the damper. When the damper fails to operate, the system fails to full heat. Most German cars are designed to fail this way. It's a safety feature to keep you from freezing in winter. The first picture below shows a linkage that has come loose from the support because the metal clip is broken. The second picture show the linkage properly in place with a new support and clip along with the part numbers for the support and clip. 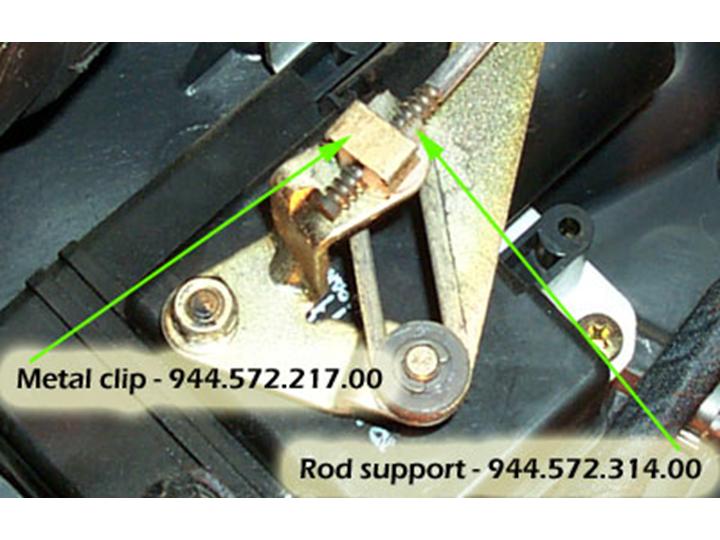 Finally, a full heat condition can be caused by a failure of the Temperature Control Unit (TCU) itself. Unfortunately, I don't have a good way to test the TCU at the moment. And, they're quite expensive unless you can find one from a car that's being parted out. So, replace the TCU as a last resort.